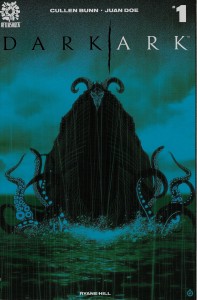 What if there was an alternative story of the flood than the one we were told in Sunday School? What if the stories of the ancient monsters were real? Cullen Bunn imagines a second Ark, one with other creatures than the traditional ones. A Dark Ark.

The first page of Dark Ark sets the tone for the entire story. It is raining, it is dark and bleak. On the deck of his ark stands Noah, gazing up at the sky and maybe a strange bird fighting the inclement weather. It is not a bird, and if he could see its true form he might be frightened to his very core. The creature returns to another vessel riding the waves. Similar to the Ark, but darker. The wizard Shae has been commanded by the dark lord to save all the beasts of the unnatural world, just like his counterpart Noah has done with the animals of the natural one. In return for bringing them safely to the new world, post flood, he will be released of his obligations and avoid an eternity in the fiery depths of hell.

This is a task that is not easily done. An ark filled with supernatural and mostly evil beasts like the naga, vampires, harpies and goblins is difficult to control. Especially on such an arduous journey where food is scarce. In the bowels of the boat are men and women, bound and chained, waiting to be sacrificed to the beasts once landfall has been made. In the new world, they need prey, the same reason behind them not attacking Noah’s Ark.

The first issue of Dark Ark beautifully sets up a powder keg ready to explode. The various desires and wills of the beasts reach a fever pitch as they can smell the humans below them, without regard for what it might mean for the future, should they devour them or the crew members. The sole voice of reason is the manticore Kruul, struggling to his pregnant partner safe. The keg might just be ignited at the end of the story.

Just like some of the very best speculative stories Dark Ark poses the question what if? In this case; What if the creatures of myth and legend were real and not just fairy tales? It is an interesting aspect to explore. God would most likely not command Noah to save those creatures who prey on his creations. He would let them drown like the sinners he was trying to punish. His dark counterpart would likely want to do the same with his beasts, but without thinking of how their true nature would impact them being so close to one another.

Bunn’s Dark Ark is entertaining on a somber level. The first issue hints at slow storytelling with both internal and external conflict. Shae and his family are torn between their duties and their love for fellow humans. It is very much like a Big Brother house with strong wills and varied personalities clashing, without anywhere to run, trapped on a boat floating on an endless sea. Juan Doe’s artwork is somewhat on the juvenile side and a more realistic style might have made it easier to distinguish nagas from harpies and characters from each other.

In the end Dark Ark is an original piece of storytelling, with very human conflicts set in a supernatural world.

This site uses Akismet to reduce spam. Learn how your comment data is processed.